More article in the group

What is cloud mining?

1.Cloud mining makes remote participation in the process of cryptocurrency mining possible. 2.Miners purchase cloud mining contracts to rent computing power. 3.Cloud mining mines cryptocurrencies in the duration of the contract and gives returns to the miners on a fixed schedule. 4.Miners do not have to learn the mining mechanisms, run the hardware and related software, purchase expensive mining rigs or pay for the maintenance. 5.Users only need to purchase cloud mining contracts to become miners and earn profits.

Bitcoins are generated through mining. When bitcoins first came into existence, ordinary computer CPUs were enough to mine bitcoins. With more and more participants in mining bitcoins, the computing power of normal CPUs no longer suffice. Now only professional mining rigs are able to mine bitcoins. Investors need to buy their own mining rigs, build a mining farm, manage and maintain them. After purchasing a mining rig, they can also hire a mining farm to house their computers, which can turn out to be quite troublesome as well. The unaffordable cost of traditional mining has made it inaccessible to most investors.

Users only need to purchase a certain amount of cloud computing power to participate in mining. Its participation threshold is very low. Users of cloud computing platforms can purchase any number of contracts in accordance with the minimum share specified, and earn mining profits every day within the contract period, which spares risks and the cost of purchasing mining rigs, deploying mining rigs, operating and maintaining the mining equipment. 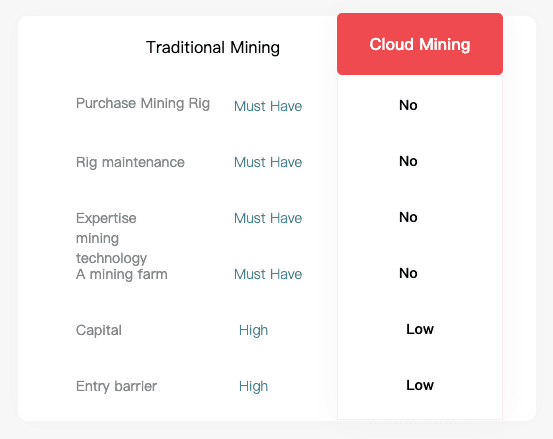 How does cloud mining work?

How to measure cloud computing power?

Q1: When will my earnings start to accumulate after I purchase a cloud mining contract?

Q2: How to check the current hash rate and daily output of my contract?

Click on "My Cloud Mining" on the "Cloud Mining" page to view the current hash rate and actual daily earnings.

Q3: Can one user purchase multiple cloud mining contracts at the same time?

Yes. One account can purchase multiple units of the same contract, or different contracts, at the same time.

Q4: When will the mining earnings be issued?

Mining earnings are settled every day and can be withdrawn at any time.

Q5: Do I need to pay electricity and maintenance bills?

There are no additional electricity and management bills. They are already included in the cloud mining contract.

The actual income is subject to the current price of the currency, hash power, mining difficulty, and block rewards.

Q7: How is my mining income calculated?

Can't find the answer you want?Submit a Ticket

Can't find the answer you want?Submit a Ticket